Off the stage, into the world: SETI and "The Earthling Project" 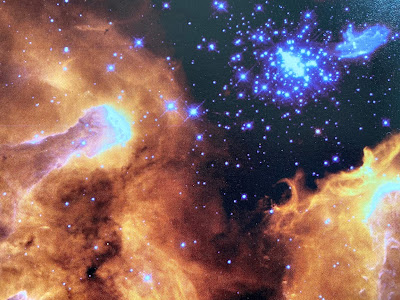 Music, much like mathematics, is frequently referred to as a universal language. The Search for Extraterrestrial Intelligence (SETI) Institute’s Artist-in-Residence, composer Felipe Pérez Santiago and SETI co-founder, astrophysicist Jill Tarter, intend to test this axiom, both on Earth and beyond. The Earthling Project is a call for people everywhere to upload snippets of songs that Santiago will meld into a collective chorus which will be launched into space this summer (along with Wikipedia and The Rosetta Project) on an indestructible disk.

Santiago, quoted in The Economist, claims that this first piece will probably resemble a “wall of sound” that will incorporate as many as 10,000 unaccompanied voices. He added that, as thrilling as it will be to send his work into space, he’s “just as excited about bringing together contributors from around the globe.” For both Santiago and Tarter, the music isn’t just for the universe; it’s a mirror for humanity. Or, as Tarter stated, “See, we’re all the same,” and as Santiago asked, “Can we unite humanity with 30 seconds of singing?”

With The Earthling Project, Santiago and Tarter have touched on a deep truth that many of us in the music profession have ignored too long: the need for inclusion. Inclusion means listening to others and creating opportunities for those whose voices have been silenced or ignored. It means acknowledging our own preferences and prejudices, while opening our minds to new sounds and fresh ideas. It is only through inclusion that music can be a universal language, and it is only through inclusion that we can unite with other humans at a level deeper than words.

What does this mean for pianists? Everything. Every day we sit at the keyboard and work to open a doorway to something beautiful. That beauty not only enriches our lives, it has the power to reach others as well. We may not all be playing concerts or creating recordings, but the very act of making music changes us because it connects us to a foundational truth of what it means to be human. It opens our hearts; and when our hearts are open, we are more easily able to hear others’ truths under the dissonance of differences.

Can we unite humanity with music? Is it a language that goes deeper than nationality, race, gender, religion, and politics? SETI seems to think so. In a world that pits science against the arts, they’ve created partnership. With The Earthling Project they remind us that music is our birthright as human beings, that all of us sing, and that everyone is welcome. In a world all too eager to cast everything in the light of “I’m right, you’re wrong,” music grounds us in our common foundation. It’s both solace and celebration, immediate and eternal. Music is our home, and (if we let it), music can be our transcendence.

To be part of The Earthling Project, visit SETI.