An Interview With Frances Wilson (aka "The Cross-Eyed Pianist")

During my recent visit to London, I had the opportunity to sit down and share a drink and a chat with Frances Wilson.  This multi-talented woman has long been one of my blogging heroes who through email and social media has become a friend.  Over the course of an hour, we never stopped talking.  For all her successes, Frances is humble, funny, and warm--a person with whom you want to share a drink and a laugh.

Frances generously agreed to share her thoughts on the many aspects of her successful career, as well as this video of her sensitive, musical playing.  For more of her wit and wisdom, follow her on social media and through her blog, The Cross-Eyed Pianist.

With over 20,000 visitors per month, and a number of awards/nominations, The Cross-Eyed Pianist, is one of the world’s most widely-read classical music blogs.  What inspired you to launch it, and how has it evolved since you started it in 2010?

It started initially as a place where I could record thoughts about the music I was playing, studying and enjoying at concerts. I had returned to playing the piano seriously after an absence of 20 years and a blog rather than an old-fashioned pencil and notebook seemed a useful way to track my progress. I’d already had some experience of blogging through my food blog Demon Cook so the initial set up process was easy. I felt the site needed an eye-catching, memorable title but beyond that I didn’t really think about readership/audience or a specific theme or USP. When I started out I never expected it to become as widely-read or recognized as it is now. I write about subjects which interest me and I hope that others might be interested too. But I also realized early on that a good blog takes time and commitment and should not lie fallow. I have always tried to offer varied articles, but with a main focus on the piano and pianists, and I launched the Meet the Artist series in 2012 because I felt it would be interesting for readers to have some insight “beyond the notes” of the lives of classical musicians. This series has in itself developed and evolved (and again, I never expected this!) and now has its own dedicated website, Meet the Artist.

You blog, write concert reviews, work as a publicist, host piano lessons on Pianist TV, run an Air BnB, play the piano, and probably three other things I didn’t think to list.  How do you manage it all, and what project excites you the most right now?

People ask me this quite often! The truth is I’m someone who thrives on activity and plenty of variety, so I’m rarely bored. Routine is also very important (see Mason Currey’s book on the daily rituals of creative people) as it enables me to structure my days to fit in the various strands of my working - and not working - life. I am rather boringly strict about my daily routine and tend to get up at the same time every day. Curiously, this actually allows me to do things spontaneously and I feel able to take on new projects.

As a freelancer, I am reluctant to turn down work, but I always try and select projects which interest and stimulate me. Everything I do is related to music in some way (except the AirBnB hosting, although I have hosted some musicians!) and I feel that these various activities feed into one big melting pot which informs my writing, my own music making and my teaching.

Recently, I’ve really been enjoying the publicity work I’ve been doing for British cellist Joy Lisney. I first encountered her when she was still a teenager and was very impressed by her mature approach to her music making. She also has a remarkable stage presence, which largely comes from her sound rather than gesture. Drawing attention to her activities (she is also a composer and fledgling conductor) has given me some insights into the workings of the UK classical music world, and also the world of PR. I’ve always been a good administrator (I worked as a PA in a publishing company before I had my son and turned into a musician/writer) and I find the minutiae of managing publicity – contacting press, liaising with venues, producing marketing material like press releases and leaflets – very satisfying. It’s also very interesting to see the industry from another perspective.

As a pianist you know how vulnerable it feels to walk out on stage and play for an audience.  How has this knowledge influenced your work as a concert reviewer?

A number of musicians whom I’ve reviewed and subsequently met have commented upon my sympathetic approach. As a pianist myself, I appreciate the sheer amount of work, attention to detail and careful practising which goes in to preparing for a concert, along with all the other aspects which need to be honed and finessed, and I feel this gives me a deeper understanding of the processes involved in performance. I do think many audiences believe it all magically comes out of the fingers due to natural talent, when in fact it takes many hours, days and weeks of hard graft.

So when I review, I do not believe it is my job (nor indeed any other reviewer or critic’s) to tell the musicians how to do their job. Instead, I feel a review should be a record of the event, and should attempt to recreate the experience of the live concert for the reader. I would rather not write a review if I am likely to say something overly negative, as I appreciate musicians can be sensitive – and everyone is allowed to have an “off day” for whatever reason.

I think the blog which inspired me the most when I was first starting out was by Susan Tomes, a British pianist and writer. I also liked Stephen Hough’s blog for the Daily Telegraph (sadly no more). They both write in an honest and accessible way about the myriad exigencies of life as a musician and tend not to make distinctions between the professional and amateur, which is inspiring and supportive. I don’t generally read other people’s reviews, though I have always preferred “long form” reviews on independent review sites and blogs rather than those in the mainstream press (where arts coverage is being squeezed, sadly)

It quickly became apparent that my own blog was a way of connecting with others – fellow bloggers and writers, musicians, concert-goers, and music lovers – and I have always enjoyed the interactions which come from these connections. They can spark new ideas for articles and create the sense of an ongoing conversation which I find very stimulating. I have a rule for internet interaction which is “tweet as you would be tweeted by”: if one is pleasant and generous online it definitely reaps rewards.

On a more practical level, my blogging has led to a variety of paid roles, including writing for other music websites and magazines, publicity work, and teaching.

What advice would you give to young pianists who are struggling to build sustainable careers?

This is similar to one of the questions on my Meet the Artist interview questionnaire and when I read responses from other musicians there seems to be a common answer to this question which is “Be yourself”, coupled with very down-to-earth advice about working hard, being a good colleague, and finding your own musical identity. It is very very hard, the industry is highly competitive, and often quite cut-throat. Today it is not enough to be good, one has to be exceptional – and not just musically exceptional. You have to be prepared to graft, to market and promote yourself, and do a lot of your own leg work. So my advice, based on my interactions with young people in conservatoire or those just starting out on their careers, is to work hard, don’t look at what others are doing and think “maybe I should be doing that”, try to create your own artistic identity, and be prepared to have a “portfolio career” (teaching, even working outside of music). Oh and don’t accept every gig that’s going just because it’s a gig. Be a little discerning if you can – this can help maintain a sense of your own artistic integrity - and make sure you get paid! 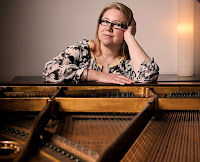 Frances Wilson is a pianist, music reviewer, piano teacher, writer and blogger on classical music as The Cross-Eyed Pianist. Established in 2010, The Cross-Eyed Pianist has become “an important voice in the piano world” (Peter Donohoe, international concert pianist) and enjoys a wide global readership. Frances is also a regular writer for Hong Kong-based classical music site InterludeHK and a content creator for classical music streaming service IDAGIO. She writes an occasional column on aspects of piano playing for Pianist magazine’s online content, and has acted as a syllabus consultant for all three major UK music exam boards. She has also appeared on BBC Radio Three’s Music Matters programme with Tom Service to discuss the effect of the internet on music criticism today.

Frances returned to the piano after a 20-year absence and subsequently completed two professional performance diplomas (both with distinction) in her late 40s. A passionate advocate of amateur pianism, in 2013 she co-founded the London Piano Meetup Group which organizes performance platforms and workshops for adult pianists in and around London.

Frances lives in Dorset, SW England with her husband, cat and a 1913 Bechstein grand piano, known affectionately as “Bechy”.