Sex on the Piano: Music Marketing in an Instagram World 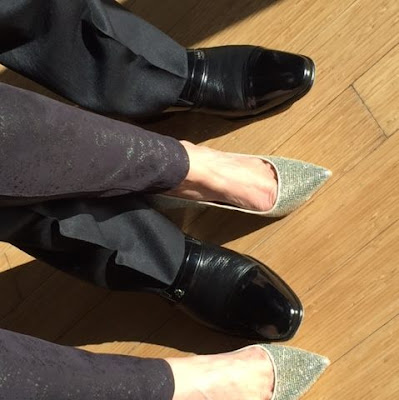 My avoidance ended a month ago when circumstances forced me to look more closely at these pianists, particularly the performer who could be named the “protopianist” of the "sex-on-the-piano" musical subset.

First reaction: distaste
Second reaction: awareness that I found the image déclassé and that my distaste was (embarrassingly) partially rooted in social class.
Third reaction: reminded myself that a) “protopianist” was building a career in a difficult market, b) I’m not her target demographic, c) a performer should be able to wear whatever she damn well pleased, and d) having performed for years in sexy gowns and stilettos, I was in no position to judge another woman's concert attire.
Fourth reaction:  Deep breath. After telling myself to stop judging a pianist by her glitter, I went to YouTube and watched several of the protopianist’s videos.  Her technique was better than I expected.  I’d like to speak to her musical expression, but every time I tried to listen deeply to what she was playing, I found myself distracted by the thick layer of manufactured sex that drenched every scene and gesture.  By the time Liszt’s La Campanella devolved into a parody of Fifty Shades of Gray, I gave up and stopped watching.
Fifth Reaction:  Anger--not at the protopianist or any of her imitators, but at an industry so narrow that performers feel they must sacrifice musical depth for a sexy surface. And the root of that anger? Authenticity.

Authenticity.  When it’s present, there’s a “rightness” to a person, a musical performance, or a work of art.  It transcends the individual because it requires one to serve something greater than oneself.  Authenticity is what makes the performance riveting and unforgettable.  Sadly, in an image-driven business, substance is too often sacrificed on the altar of style.  The transcendent power of music is being glitter-bombed by manufactured faces and slick marketing. Everyone suffers—the pianists who feel they need to do this to create a career, the music and the listeners.  I’m saddened and angry that the music marketing machine has forced so many to choose glitz over depth in order to have a shot at a career.

I know that music has always been and will always be show business.  As unfair as it is, I know that attractive players will be favored over those less visually appealing.  But music promotion has to be about more than image because under the publicity tinsel, great music isn't about make-up, flashy gowns, stilettos, boob jobs or false eyelashes; it’s about a willingness to put ourselves aside and let the music be the star.  It’s about knowing what we’re “selling”—our images or the music.  And most of all, it’s about committing to authenticity in ourselves and in the music we play—regardless of appearance.
Labels: authenticity classical piano female pianists music blog music marketing pianists piano blog sexy pianists

Tom Schnauber said…
I don't know who your protopianist is, but I have seen and heard a number of videos with female pianists in, shall we say, "distracting" attire. I'm old enough now that I can get past the distraction and actually listen, and I'm usually disappointed in the musicality. Then again, I've also been disappointed by pianists in less-distracting clothing; so I don't think it's a one-to-one correlation (i.e., poor playing doesn't automatically lead to skimpy outfits).

Then again, I am reminded of all the accounts of Liszt as a young man and his milking of the sex-symbol status that the public had conferred upon his apparently gorgeous person; or Liberace's more subdued yet still charged (not to mention ironic) image as a ladies' man. Even Tzimon Barto seemed to be revered more for his pecs than his playing. And, off the keys, entire treatises can and have been written about the gender-bending sexual aura that surrounded castrati in the 17th and 18th Centuries.

There is, of course, a difference in social significance, based on centuries of inequality, between a man playing the sexy card and a woman doing it. Still, it seems a card that has been in musicians' decks for a very long time.
February 2, 2020 at 2:58 PM