Music From a Room: An Interview with Composer Joel Lundberg

One of the reasons I made the music of living composers the focus of my piano career is the joy of finding new music so beautiful that it begs to be played.  Music From a Room is one of these happy discoveries.  This recording--released in the first dark days of pandemic lockdown--contains pieces that pay homage to Debussy and Satie while remaining firmly at home in the 21st century.  They are a refreshing respite from an uncertain reality.

I'm thrilled that composer Joel Lundberg agreed to be interviewed for No Dead Guys.  Here are his thoughts on composing, this "from the heart" recording, and the challenge of releasing an album in the middle of a pandemic.

You’re best known as a producer and guitarist (having toured with artist and bands such as Debbie Harry, Mumford and Sons, and your own band Kristoffer and the Harbour Heads) yet you just released Music From A Room—a CD (Vinyl) of solo piano music.  What prompted you to compose something so different than the indie rock you’ve spent your career performing?

I’ve been writing music for different kinds of ensembles since childhood, ranging from rock bands, jazz bands, string quartets, horn quartets, chamber orchestras, pipe organ to name a few. The last twenty years I’ve been preoccupied with touring, producing and writing music for different indie rock acts. Somewhere along the way, the urge for composing in a more classical manner again started to grow on me.

As a guitarist, how challenging did you find it to write for the piano?

During my career as a producer and songwriter I’ve “cheated” on keyboard instruments but I’m quite far from being a classically trained pianist. In order to create “Music From a Room” I needed to get closer to the piano in a deeper and more profound way. I started out by studying the classic piano repertoire from Bach, Beethoven and Debussy from a composers perspective, and from there I started to write compositional etudes. One of all challenges was to make the music playable. I believe that music should feel good for the ears but also for the hands performing it. For me as a composer it’s very important that the interpreter find the music interesting, intriguing and fun to play. A happy interpreter equals a happy composer.

The holder of a a master’s degree in composition and improvisation and you describe yourself as a “very well educated indie rock musician with a bipolar approach to music with a classical ambition.” What inspired you to compose classical piano music?

Classical music has always had a big place in my heart and life, and after composing for a variety of different ensembles I felt that I needed to change my perspective. The closest I’ve got composing for piano in the past was a duet for two Steinway D’s during my university years.

Lately I’ve felt that my compositions and productions often took “larger-than-life” proportions, adding textures and layers in absurd quantities and that it needed to be addressed. I wanted to explore and develop my composition for the small format. And there she stood, the piano!

I find the whole idea of the classical non-performing composer inspiring. Every note, nuance and part of the composition is scrutinized by the composer (me). The lack of improvisation also gives time for afterthought and reflection. I believe that some music, especially mine, benefits from this. Being a non-performing composer means that I’m very dependent on the interpreter and that complex, interesting and inspiring relationship that occurs between us.

I’m also inspired by the piano itself. The instrument gives you many options but also a solid framework that determines what you can and cannot do. 88-keys and two hands might seem limiting for some people, but for me having a firm framework rather boosted my inspiration.

The music within the project “Music from a Room” is inspired by the artistic movement that occurred in Paris around 1900. You could see it as homage to that era. Impressionism was regarded as a alternative movement. Breaking conventions and in a way paving the way for our modern musical society. Almost like a punk-movement of its days. I find that very interesting and inspiring.

You’ve described Music From a Room as having been made with the heart.  Can you tell me more about this?

The whole project is commissioned by me, payed for by me, produced and organized by me. Everything from the vinyl and the artwork, painted by my friend and artist Ola Mellberg, to the music itself is all about heart. My heart. In other words, it’s very personal.

The eight lyrical pieces featured on this recording are hauntingly evocative and your pianist, Kalle Stenbäcken, plays them beautifully. Had you chosen the pianist before you composed the pieces, or did you write them for Stenbäcken?

As the project started as a way of fine tune my composition for the small format, there were initially no pianist/interpreter in mind. Just me, an empty sheet of paper and a piano. During the composition process I realized that the music was more than just compositional etudes and if I wanted to do right by the music I needed help. I came to the conclusion that it is impossible to magically produce 20.000 hours of practice just like that so I needed an interpreter!

After meeting with several pianist I eventually stumbled across the concert pianist Kalle Stenbäcken. I got his name from a mutual friend. We met and we almost immediately clicked. It turned out that we had a lot of musical references, not only in the classical world but also in the alternative indie sphere.

The music recorded during 3 days in December 2018, using a beautiful Fazioli grand piano.

This recording was released in the middle of the Covid-19 pandemic.  How did this change your release, and how are you finding ways to bring online attention to the album?

The plan was to go on tour as a duo where my role would be the very-much-alive-composer presenting the project and Kalle as the pianist. This of course is put on hold. Hopefully we will be able to do some touring later this year.

I’ve had a dream with this project to take the music back to the “ugly common rooms”. First off, I don’t actually believe there is such a thing as an “ugly common room”, but what I mean by that is that classical music doesn’t necessarily and exclusively need to be played and appreciated in a concert hall. Just to be clear, I don’t exclude the concert hall. So one idea for the tour have been that one night we play a concert hall the next a more alternative location such as a rock club or a pub. As long as there is an acoustic piano in decent condition present.

Since touring is not an option right now, the internet plays a huge role getting my music out there. I’ve had some luck with Spotify. The song “P.I.B (Post Industrial Bliss)” was featured on the “New Classical Releases”-playlist which got over 500.000 followers. That of course helped to jump start the release of “Music from a Room”. And doing this interview for your blog and others certainly helps spreading the word. Thanks to people, like yourself, with a burning passion for music my compositions will go even further!

Music From a Room is available on all streaming platforms.  Will scores be available for purchase?

Yes! Feel free to contact me using my social media. At the moment there is no paper copy of the score, just a pdf.

If you're interested in getting the very rare vinyl (only 100-copies made) follow the link that applies to you:
Customers in Sweden
Customers within the EU
The rest of the world 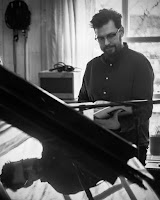 Joel Lundberg is not your typical composer of classical piano music.

First off, he is not a classically trained pianist. (even though he has a University master´s degree in composition and improvisation.)

Joel says that he is a result of his record collection, and you can probably hear this in his music. One could say that his latest work “Music from a room” is a gift packed with this broad musical vision, wrapped in impressionistic paper and ready to be torn open.