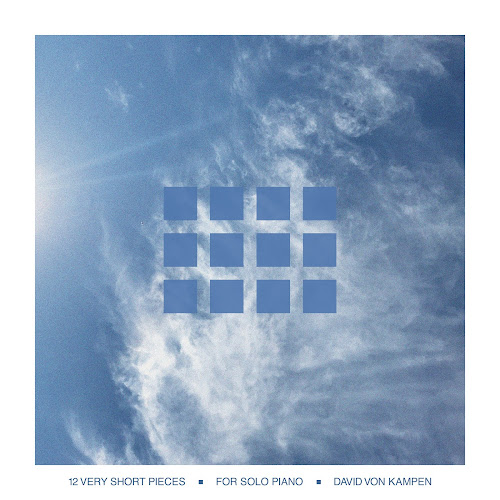 Written jazz piano solos can be disappointing to play. Few have the spontaneity of improvised music, and most are either fiendishly difficult or boringly simplistic.  Composer David von Kampen's compositions avoid both traps by being sophisticated enough to appeal to the discerning pianists yet still accessible for most performers--an impressive achievement from a composer most known for his award-winning choral compositions.   When I heard David's recently released album, 12 Very Short Pieces for Solo Piano, I contacted him and asked him two things:  1) will you be selling sheet music for these pieces? and 2) would you be willing to be interviewed for No Dead Guys?  Thankfully, David answered "yes" to both questions. Here are his thoughts on music, composition, and this collection of piano gems.

What drew you to music and to composition?

I started piano lessons in 2nd grade, but I had already been exploring the piano in my family’s house. I was always interested in making up songs and teaching myself how to play by ear. Learning music from notation didn’t interest me very much at first, but I was pretty motivated to figure out the piano on my own terms. As I got older, that impulse organized itself a little bit and I got more comfortable with theory and notation. At some point I realized you could major in composition in college, and it was basically all downhill from there.

As your many awards and publications show, you’ve had a successful career composing for choral and instrumental groups. What prompted you to create your latest project, 12 Very Short Pieces for Solo Piano?

Something about the COVID quarantine ignited a creative fuse for me. I’ve been really productive in the last few months. Being home with my family and having time to work on various projects has been good. The idea of a solo piano record was intriguing because of how self-contained it would be. Doing the whole project on my own - composing the pieces, then recording them, then promoting the album, was a very satisfying series of steps. And a good fit for the isolating times we’re living in!

How do you think your choral composition influences the music you write for the piano?

Writing for singers teaches you a lot about the importance of voice leading and how to make music interesting without it being extremely difficult. I don’t set out to write solo piano music that’s just for amateurs, but if I write what feels honest to me, I usually end up with something melodic and playable. A frustration I have with the contemporary New Music scene is that so much of the literature is incredibly technically difficult and really only approachable by professional players. I think there’s room for lyricism and accessibility in serious, highly-crafted music. I do think that musical worldview comes partly from my experience with choral music.

12 Very Short Pieces for Solo Piano is lyrical, playable, and contains musical hints of Chopin, Caroline Shaw, Pat Methany, Chick Corea, Fats Waller, and others.  Tell me about your musical influences and how you pulled on them to create these whimsical piano solos?

What a great list! I’m honored that these pieces made you think of those incredible composers and players. In terms of artists I think of as influences, I’d add Brad Mehldau, Bill Evans, Maria Schneider, Bob Brookmeyer, lots of choral music, and older composers like Grieg, Mozart, and Victoria. I can’t really stop all those sounds from swimming around together in my head when I compose.

12 Very Short Pieces for Solo Piano is just one of your recent piano projects.  Tell me about Trisagion, a piece written for pianist Paul Barnes that will be premiered in September as part of Barnes’ program, A Bright Sadness: Piano Music Inspired by Greek, Latin, Hebrew, and Native American Chant.  How did you become involved in this project, and how did you translate chant—a vocal medium—to the keyboard?

Last year, Paul Barnes commissioned me to write this piece based on two different Orthodox chant melodies. He has previously commissioned other composers (including Philip Glass) for similar chant-inspired projects but he gave me the freedom to utilize the chants however I wanted in the piece. I ended up stating one of the melodies almost verbatim, but with extensive reharmonization. The other chant melody I used as a jumping-off point for rhythmic development and more contrapuntal ideas in the faster middle section of the piece.

One of the things I enjoyed about your piano compositions is how you successfully combined lyrical melodies and jazz chords within a solid compositional framework, resulting in pieces that are both accessible but not predictable. How difficult was it to do this within such short compositions?

“Accessible but not predictable” is a perfect description of what I’m trying to do. I don’t like writing abrasive sounds, but I don’t ever want the listener to feel like they know exactly what’s coming next. As a listener I’m drawn to shorter pieces because I love seeing what concise composers can do. I often tell my students that their 8-minute piece could really have been 3 minutes. Get in, get out - and how compelling was it? So my goal for these pieces was to establish a “world” very quickly, create a logical flow of musical events, and then bring it to a satisfying close. Telling myself from the start that these would be “Very Short Pieces” was pretty freeing. I put no pressure on myself to artificially stretch the music out for the sake of a more impressive run time.

Where can people find 12 Very Short Pieces for Solo Piano and where will we be able to purchase sheet music copies of these pieces?

My recording is now streaming on all platforms (Spotify, Apple Music, iTunes, etc.). 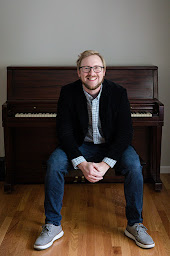 David is a six-time Downbeat Award winner in graduate-level jazz writing categories, a three-time winner of the Vancouver Chamber Choir Young Composers Competition, and was named MTNA Distinguished Composer of the Year for his song cycle "Under the Silver and Home Again." David was the recipient of an ASCAP Young Jazz Composer award, winner of the San Francisco Choral Artists New Voices Project, winner of the National Band Association’s Young Jazz Composers Competition, and received Honorable Mention in the New York Youth Symphony First Music Commissions.